“How marvelous is a machine and the mind who made it”

The centerpiece of the Amelia Earhart Hangar Museum is Muriel – the world’s last remaining Lockheed Electra 10-E — identical to the plane Earhart flew on her final flight.

Named after Amelia Earhart’s younger sister, Grace Muriel Earhart Morrissey, Muriel is one of only 14 Lockheed Electra 10-E aircrafts ever made. Muriel carries on the legacy of both Earhart sisters.

Built in 1935 by Lockheed Martin, the plane was first sold to Pan American Airways and flew in South America, mostly between Brazil and Argentina. Flying in South America was a fortunate factor in the plane’s survival during World War II when many planes were used for military defense, lost or scrapped.

In the 1950s, the plane was sold to Provincetown Boston Airways where it flew Cape Cod-Boston-New York routes until it was purchased in 1970 by Zephyrhills Parachute Center in Florida. Not designed for the daring sport, the plane endured a great deal of wear and tear from hundreds of skydivers climbing onto its wings to jump.

In 1979, the plane was bought by the Wings and Wheels Museum in Orlando, Florida, where limited space forced it to be stored outdoors — exposed to intense heat and humidity — causing further deterioration. When the Museum closed in the mid-1980s, the plane was in such bad condition that the Museum intended to sell it for scrap.

Fortunately, a female pilot and mechanic was looking for a plane just like the one Amelia Earhart had flown on her fateful attempt to circumnavigate the globe. She spent 30 years restoring it to be identical to Amelia’s – including the red lining on the wings and a circular antenna on top. Health challenges prevented her plans to fly Muriel around the world, leading to Muriel’s arrival in Atchison, Kansas. 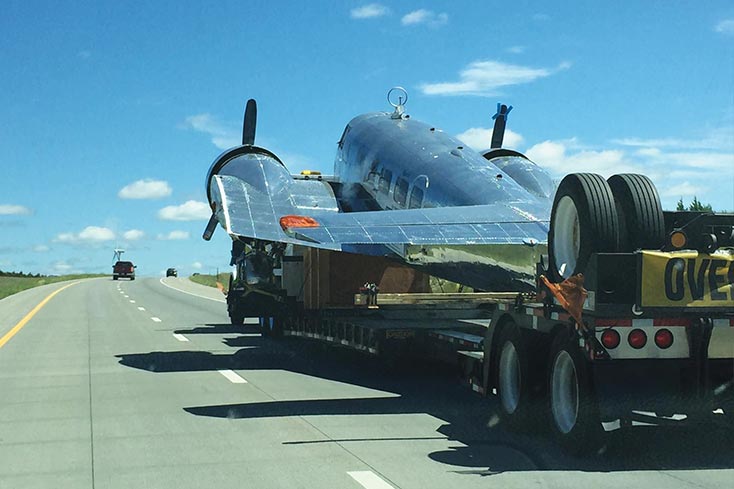 Though restored to flying condition, Muriel was meticulously dismantled. Guided by a cavalcade of escorts, Muriel was carefully secured for her 1,206 mile, 6-day journey from El Cajon, California, to her new home in Amelia Earhart’s  hometown in Atchison, Kansas.

On August 8, 2016, Muriel’s arrival in Atchison was cheered by hundreds of elementary school children and area residents who lined the streets to welcome her. Now carefully protected during Museum construction, Muriel will become the centerpiece of the new Amelia Earhart Hangar Museum when it opens to the public in 2023.